Apple is pushing Yosemite hard and secretly Yosemitizing things. iTunes was updated to its shiny new look on Mavericks, day one upon Yosemite launch. I liked it. The only problems I had with the new iTunes are:

Just now I found that the Mac App Store in Mavericks is also Yosemitized: 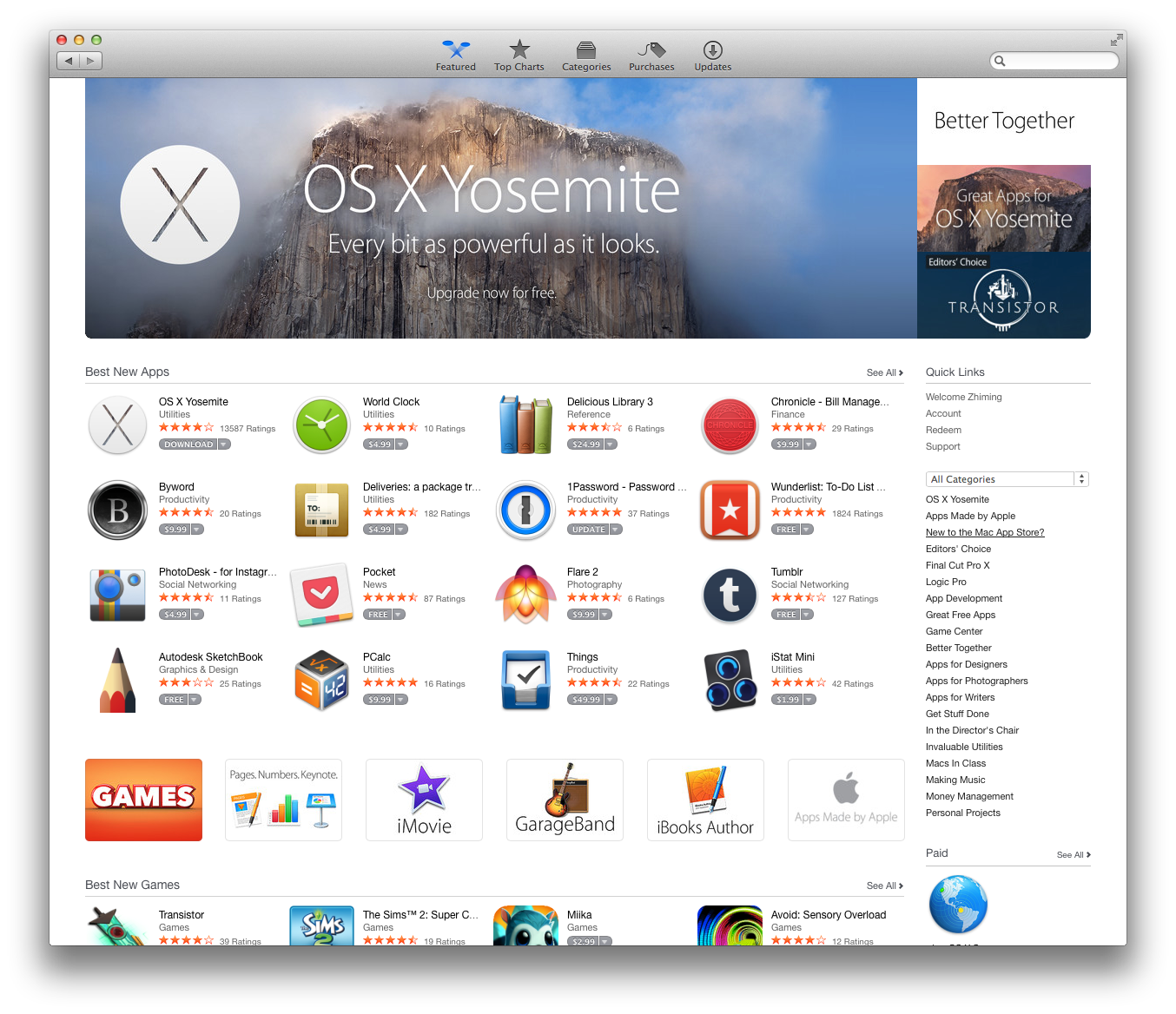 The chromeless UI certainly looks a bit weird, and the font seems a bit too small. However, I'm sure I'll quickly get over these shortcomings, and might even grow to appreciate them. Even more so when I finally upgrade to Yosemite (I'll wait for Thanksgiving break or 10.10.1 this year, whichever comes first — looks like the former will come first, considering the first 10.10.1 developer beta was out merely two days ago, reportedly focusing on WiFi, etc.).

On the font side, unfortunately the small font size in the new Mac App Store does make text fuzzy on my non-Retina display. I didn't notice the fuzziness in the new iTunes. Anyway, everything is optimized for Retina — Apple is also secretly pushing Retina hard. In the Apple ecosystem, apparently you always want to stay at the top of the line. Due to Apple's nature, the degree of hardware-software integration is simply unparalleled, so only the latest hardware enjoys all the new features and love. Unfortunately, the typical lifespan of a Mac is much longer than the hardware/software release cycle.

The truth is, we (or at least I) adapt to things much quicker and easier than we'd imagined (or otherwise would be willing to admit). When iOS 7 was demo'ed on WWDC 2013, I was like "no way! What's with those stupid flat crap?" But when the update came, I hopped on and was happy ever since. (I reserve my opinion on the icon design.) Later when I installed an app that was not updated for the new UI, I was like "OMG, what's with this clumsy UI?" I guess legibility issues, WiFi issues (with Yosemite) and responsiveness issue (with iOS 8 on iPhone 4S — AT&T, where's my preordered 6 Plus?) are harder to impossible to adapt to, but they will eventually be fixed, or support-dropped, or hardware-upgraded (with $$). So in the end (almost) everyone will be happy. And one day when we face the old thing again by chance, we'll flee as fast as we can: "what's with that..." (I did exaggerate. Also, I know, many people just don't care about design, or have ill tastes, or can't find the buttons after a minimal number of UI tweaks — I'm not including them in the "we" here.) Those who claim that "I won't upgrade until..." are just kidding themselves, and certainly no one will wait for them or make their "until..." come true. Most of those "won't upgrade" folks will eventually upgrade and be happy. Those that really don't upgrade (like those still running Snow Leopard) either can't afford the new hardware, or suffer from senility (seen from the deep hostility towards new things). Or they have some important legacy software that would break with an upgrade; poor dudes.

Same goes for newer, shinier, seemingly unnecessary deluxe hardware. I'm still stuck on a Mid-2012 MBP 13" Non-Retina. Retina seems highly useless for me since I do most of my work on the 27" external display — the 13" internal LCD hosts a single maximized Activity Monitor window most of the time (and sometimes also a Transmission window). I expect my opinion about Retina to change after I upgrade to a Retina model next year. (It will be a pretty major purchase though — i7, 16 GB memory, and 512 GB SSD are musts, and there are like a million peripherals to buy — Thunderbolt to Ethernet, Super Drive, etc., etc.) This shift of opinion after upgrading to something unnecessarily good (and ending up not being able to tolerate anything inferior) is best described as "sadly converted". Some folks are already sadly converted by the Retina iMac. See, for example, this article on Ars Technica:

Prior to getting the Retina iMac on my desk, I would have said that "retina" isn’t necessarily something we need on the desktop. Most people don’t notice pixels on the desktop at a normal seating distance. However, after getting to A/B compare the Retina iMac with the standard one over the course of a week, I’m sadly converted. I just don’t know if my wallet can take the abuse.

And others are bitterly desiring one (me included — sadly two Macs are too much for a university dorm). See, for example, this comment on the aforementioned article:

I WISH APPLE TECHNICA WOULD STOP WITH ALL THESE ARTICLES ABOUT THE IMAC.

It really makes me want one unjustifiably.