Emacs is notorious for its loading time. For me, this is especially annoying when I'm editing LaTeX files — AUCTeX takes about five seconds to load, and once I exit Emacs (especially after a quick edit), all that work is wasted, and next time I want to do some quick editing with that same LaTeX file — sorry, another five seconds.

This problem can be solved by "using that same Emacs", i.e., running Emacs in server mode, then connecting to the server via emacsclient. Below is my script, which I call emc, to make emacsclient more user-friendly. emc opens a file (given as $1) on the server, launching one on its way if none is detected. Note that I used -cqta= for emacsclient. The -c option is --create-frame, i.e., create a new frame (in the current tty, for instance) instead of using the existing frame (in another tty, for instance); this allows for multiple frames accross different ttys. The -q option is for --quiet, suppressing messages like "Waiting for Emacs..." The -t option is for --tty, or equivalently, the familiar -nw option of emacs. The -a= options is --alternate-editor=; according to the manpage, -a, --alternate-editor=EDITOR has the following effect:

if the Emacs server is not running, run the specified editor instead. This can also be specified via the `ALTERNATE_EDITOR' environment variable. If the value of EDITOR is the empty string, run `emacs --daemon' to start Emacs in daemon mode, and try to connect to it.

Note that emacsclient requires a filename, so my script prompts for one if $1 is empty.

Note that using emacsclient has the additional benefit that the same buffer is simultaneously updated accross different ttys (See screenshot, where I opened the current post in two different ttys). This way, you won't face the nasty "file changed on disk" problem when you accidentally edited the same file in another tty session. 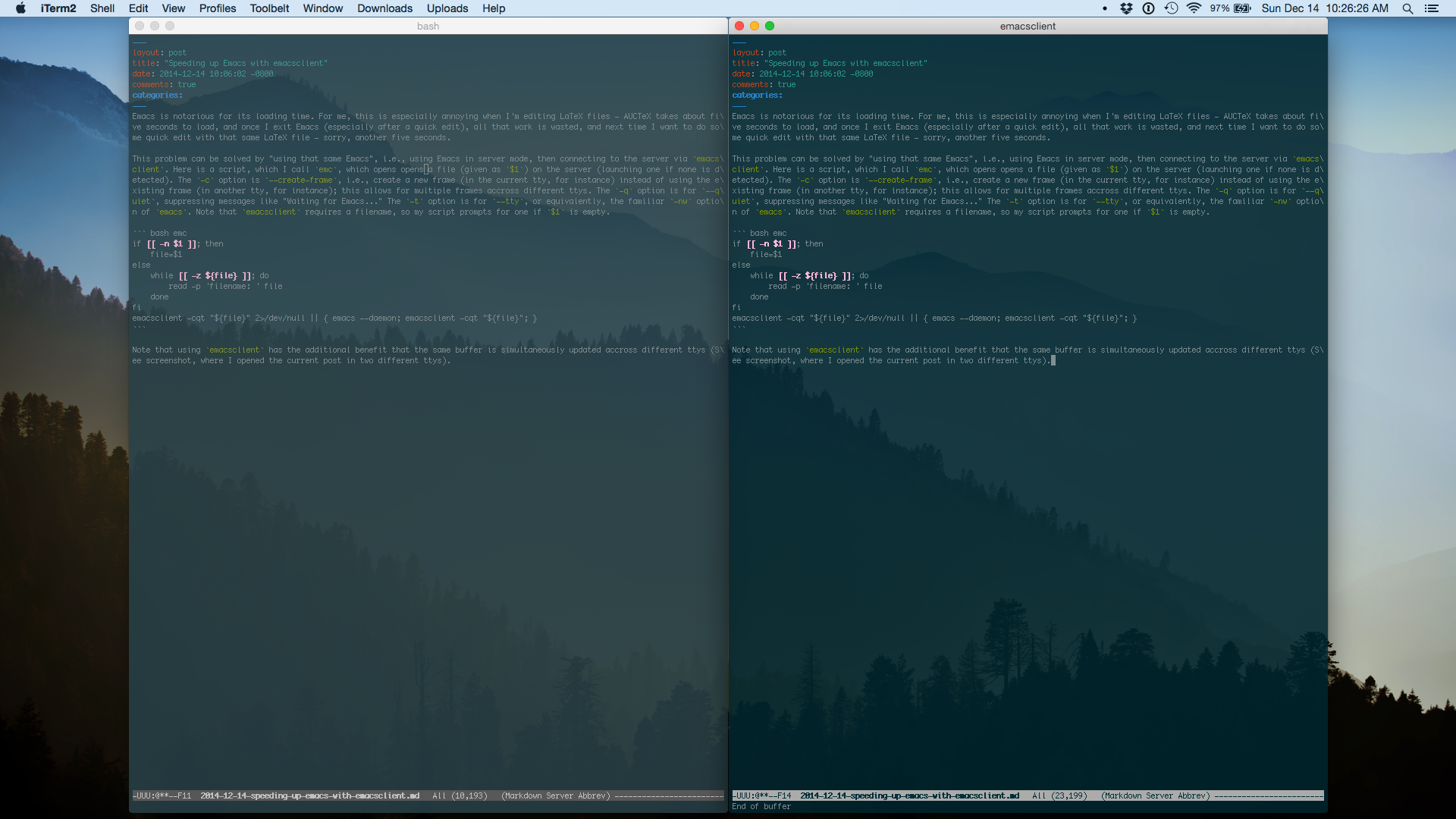 screen shot of multiple copies of the same buffer

Note: if you use emacsclient to edit git commit messages in Git Commit Mode, remember to use C-c C-c (git-commit-commit) to save the commit message rather than using server-edit or C-x C-c to exit Emacs. Otherwise, the COMMIT_EDITMSG buffer will persist in the Emacs server, and you'll be prompted to revert buffer the next time you edit another commit message, which is pretty annoying.

I just started using emacsclient, so the above script might be buggy in certain edge cases. I'll report when I run into issues.