Seriously. Go to Settings->Cellular, and scroll all the way down to reveal the "Wi-Fi Assist" switch. See screenshot at the end of the post. You'll see a description:

Automatically use cellular data when Wi-Fi connectivity is poor.

Switch that off, if you occasionally have shitty Wi-Fi (that kinda works anyway) and at all care about your cellular data usage.

I'll tell my horror story now. Background info: I have unlimited voice and text plus 300 MB data per month, since I've got Wi-Fi almost everywhere I go. Granted, school Wi-Fi (especially dorm) is shitty and drops all the time, but I'm not a streaming-music-on-mobile person, so the Wi-Fi is mostly fine for checking emails, browsing the Web (yes, even iMore or The Verge kind of Web), getting push notifications, or even downloading a few podcasts on the go. I usually end up using less than 200 MB of cellular data per month.

However, at the beginning of August (on iOS 9 Public Beta 2 at that time), I somehow managed to burn through 200 MB in four or five days, with consistent daily stats, while I did nothing special, at least not actively. The timing overlaps with when I got my Apple Watch; I don't know if that's a coincidence. Anyway, more than 90% of that usage was under System Services->Documents & Sync, which I could do nothing about. I had to turn off cellular data until almost the end of my billing cycle, when I stumbled upon the "Wi-Fi Assist" setting. Since then, I only used 4.8 MB — with 1.5 MB for System Services — in four days. Hardly a coincidence, I'd say.

In fact, I was pretty delighted when I heard about the ability to auto fallback to LTE when one's on the fringe of Wi-Fi in WWDC '15 Session 719 ("Your App and the Next Generation Networks"). However, without another likely suspect, I guess what happened in reality was that when I was sitting in the center of a shitty Wi-Fi, with the system trying to do some background job involving a network connection, it just kept trying to connect via LTE, which probably beat the shitty Wi-Fi consistently. It would be nice if one day our phones would be aware of our data plans (realize that not every one is on a $100/mo 15 GB plan) and throttle its usage wisely.

Anyway, I simply can't understand why the "Wi-Fi Assist" switch, a general system-wide option, appears at the end of Cellular settings, after all the per-app nickel-and-dime settings and statistics. It's nearly impossible to find. Generic settings should be at the top, period.

By the way, I have a lot of gripes about iOS 9 Beta. Maybe I shouldn't whine about beta software — I never used another iOS beta before so maybe they were even worse — but I can't help it because this was supposed to be a stability release. Several things immediately jumped to my mind (all present in the latest Public Beta 3), without even trying:

I could go on and on and on, but I don't want to waste more time on this crap. The gist is that I'm not impressed by iOS 9 at all at the moment (oh, one thing positive: San Francisco is nice). Hopefully the final release would be in much better shape; but I don't see any hope for the Music mess — it's not likely to be cleaned up any time soon. I mourn for the old Music app, which is likely gone forever. 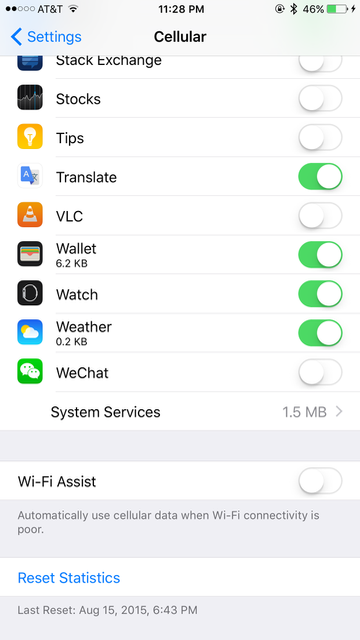